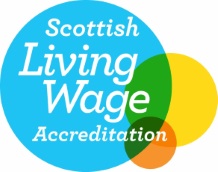 This year CAS became one of 500 Living Wage Employers in Scotland. This means we guarantee to pay staff an hourly rate set by the Living Wage Foundation – currently £8.25 per hour.

Now the cynical, or perhaps just the observant, among you may point out that as an IT business operating within a very competitive market in Edinburgh, very few employees are going to be paid the Living Wage at our firm.

And this is correct. Paying the Living Wage isn’t going to attract a queue at our door of IT specialists wanting to work here. So of course we pay a competitive rate within the industry, and can also offer the benefits that come from being an employee-owned company.

However, that doesn’t mean that signing up to the Living Wage is irrelevant for a company like CAS. In addition to our team of in-house specialists, there are many other businesses that supply CAS, from those that provide the water coolers, to those that deliver our cleaning service.

Ensuring that these individuals are also paid at least the Living Wage, goes some way to promoting fairness and dignity as they provide a service to our relatively prosperous industry.

Ken Naismith, CAS Chief Executive, says: “When we first considered joining the Living Wage Foundation movement I dismissed it as not relevant to a firm of well-paid IT specialists. However, when I thought about it, there are other companies whose services we employ, and they are benefiting from our pledge to pay the Living Wage.

“Yes, there comes a pressure point if labour costs get out of step with competitors so the baseline still needs to be carefully balanced.  But we also have situations where working tax credits are being paid to people whose employers could afford to pay them more - effectively tax-payers are subsidising costs in these circumstances, artificially increasing profits and ultimately dividends enjoyed by such organisations and their shareholders.  That is neither fair on tax payers or dignified for employees who are putting in an honest day's work.”

To find out more about the Living Wage Foundation visit www.livingwage.org.uk